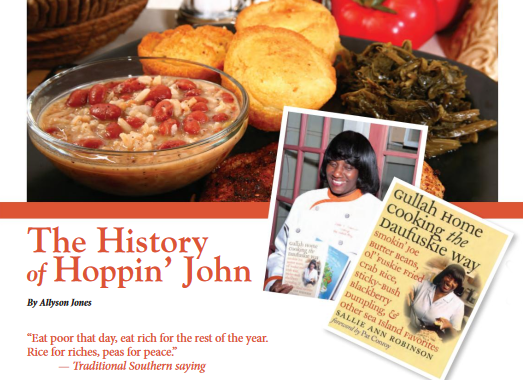 The African roots of the dish can be traced to the antebellum rice culture of the South Carolina Lowcountry, where peas and rice have been cooked together for centuries. Tradition dictates that a side of collard greens representing paper money be served with Hoppin’ John to ensure prosperity in the coming year. Several sources also suggest a penny or dime should be placed under the plate or in the dish itself for additional wealth.

The first written “receipt” for Hoppin’ John appeared in “The Carolina Housewife” (1847), and was written by Charlestonian Sarah Rutledge. The simple recipe called for one pound of bacon, one pint of peas and one pint of rice cooked in a single pot.

While most experts agree on the history of Hoppin’ John, they often disagree on the cooking method and even the ingredients.

“I know you’ve got a lot of Northerners who make it with black-eyed peas. That is NOT a Southern tradition,” she said. “The traditional Southern peas for Hoppin’ John is red peas. You can quote me on that! Red peas. Some people call them cow peas; some people call them red peas or field peas. Traditionally, you would have to pick your peas.”

“Let me tell you the meat that was used,” Sallie Ann continued. “Some people used one or other and some people used a little of all. When I cook mine, I use a variety because it adds the true flavor. I use some ham hocks, some smoked neck bones and some pig tails. Some people put pig’s feet in it, but it varies. Some use fatback, hog maw—some people have even cooked it with chitlins. But those are true, traditional Carolina meats that they use in the dish.”

Sallie Ann’s recipe for Hoppin’ John is included in her third cookbook, but she carefully explained the traditional Daufuskie Island way to prepare this side dish, which was served immediately following New Year’s Eve Watch Night Services.

I don’t wait until New Year’s to cook Hoppin’ John, but a lot of people will wait. I love it to the point, where I say, “Who promised me tomorrow?”

Another way, the newer way, is instead of cooking it on top of the stove.

Once you add your rice and mix your peas in it, you can pour it into an aluminum half pan. Cover it with foil, stick it in the oven and bake it for about 45 minutes. It cooks it really dry. You have to stir it on occasion. Rice has to be stirred to cook even when you’re cooking it with the meat.

Come back and stir it, even it off and put the foil back on it and let it cook for another 30-45 minutes, until your rice is done.

To learn more about Sallie Ann Robinson and her cookbooks, sign up for cooking classes or inquire about catering, visit thegullahdiva.com. To make reservations for Sallie Ann’s Native Gullah Tour, contact Tour Daufuskie at (843) 842-9449 or visit tourdaufuskie.com. 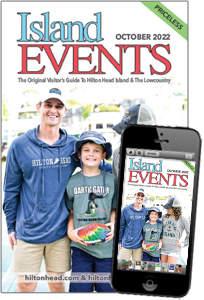